The Chicago Debate Summer Institute is the two week training camp that has launched the Chicago Debate League season since the origination of the league, back in the summer of 1997. It was designed to replicate the educational impact of university debate institutes costing thousands of dollars, and Chicago established one of the largest and most high-impact urban debate summer camps in the nation.

Last year CPS had to cut back its summer enrichment funding, and unfortunately the CDSI was a casualty. But this year, thanks to fund-raising done by the Chicago Debate Commission — and a small group of generous donors — the CDSI is back! 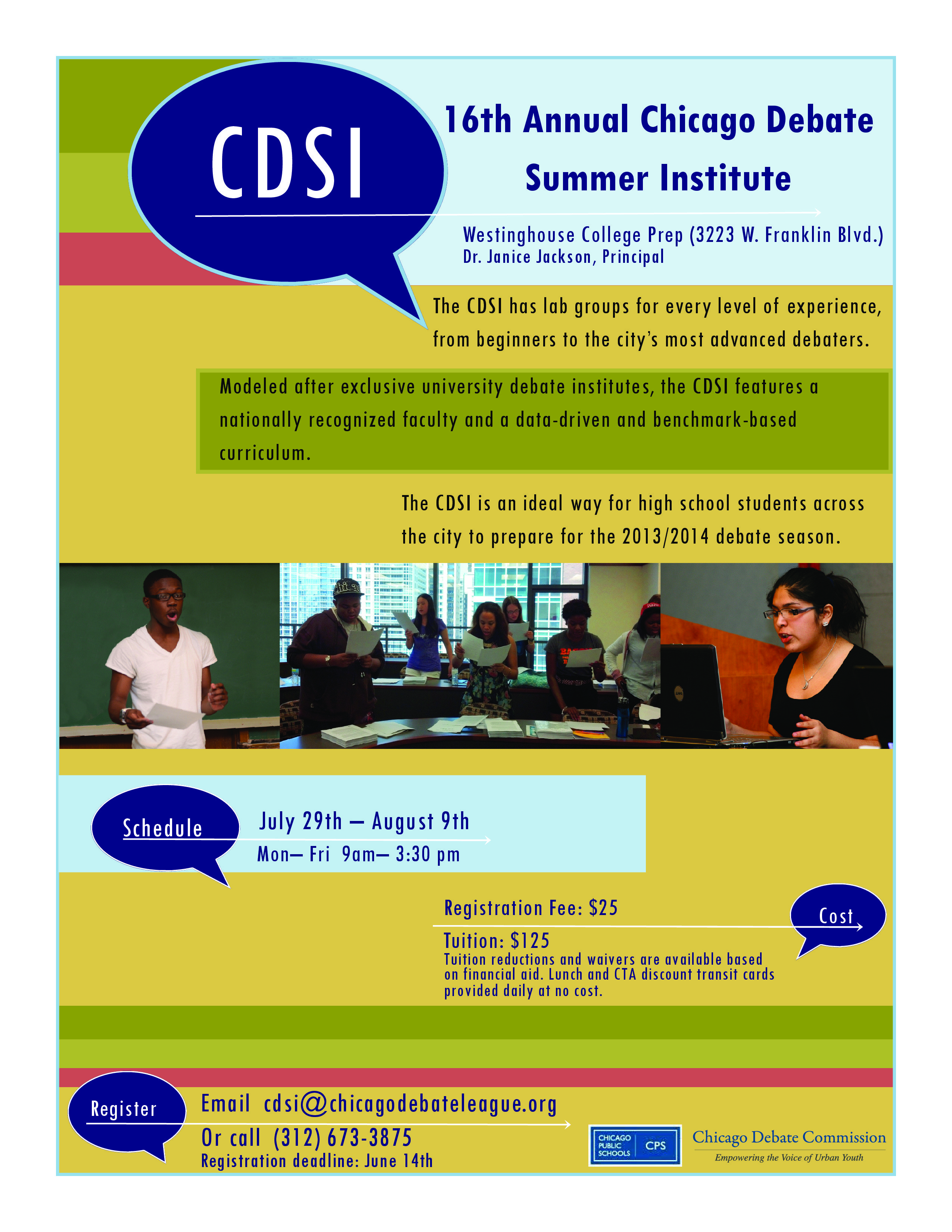 The CDSI has a finely honed curriculum that emphasizes skills building, aligned with the CDL Debater Development Benchmarks, and topic immersion. The CDSI serves every level of debate experience — from raw beginner just recently recruited, to National Circuit Varsity elim round veteran — with carefully drawn lab groupings, instructor placement, and individualized learning strategies that ensure that every student attending the CDSI leaves it a markedly improved debater, and ready for Tournament One.

The curriculum and schedule will include demonstration debates, practice debates and speeches, special group seminars, and a two-day pre-season debate tournament.

A daily schedule will be posted on the CDL site later this summer.

The CDSI has just begun the process of hiring its staff but intends to hire some of the best debate teachers, and most accomplished debaters and coaches, available, both locally and from outside the immediate area. The CDSI has a history of having a superb instructors, providing our students with a unique opportunity on the year-long calendar to learn from a diverse group of such highly-qualified teachers.

Lunch, but not breakfast, will be provided free daily.

Each student participating will receive a set of 2013/14 Core Files and filing materials.

Student incentives will be provided, along with awards at the CDSI Tournament.

CTA passes will be provided daily.

All students must pay a $25 registration fee. The registration fee should be paid by each individual student, not by the school, since its primary purpose is to reduce attrition (to help ensure that the student attends). Tuition is an additional $125 ($150 total), though there are tuition reductions or waivers in instances of financial need.

Each student should also mail in a copy of the completed form, along with a check for their registration fee and (if they are non-Title I) tuition. The form and check should be mailed to:

The deadline for registration is July 8th.

Why You Should Encourage Your Debaters to Attend the CDSI