Four Varsity debaters from each CDL school were assessed in the early season (T1 or T2). Those same Varsity debaters were assessed in the late season (T5 through T6) and their growth and learning as debaters over the course of the season is documented as Varsity Season Growth. Additionally, four first-year debaters from each school were assessed in the late season. Each school is given a single average qualitative rating of their debaters (on the 10 point scale that the Debater Development Benchmarks use) based on the top four scoring varsity member and their top 4 scoring junior varsity members. This rating measures how educationally developed their debating is by the end of the debate season. 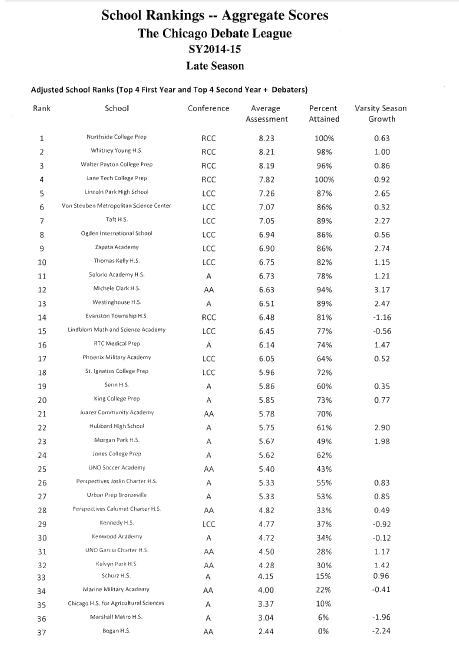 Congratulations to our Qualitative Performance Incentives winners based on the Qualitative Assessment Project results as reported above.

This week the CDC will be sending each schools’ coaches the specific late-season assessments of their debaters, along with average performance ratings on each relevant benchmark. An additional ranking, incorporating all debaters assessed at each school (not exclusively the top 8 varsity and jv) in an aggregate score across the entire debate program, and a enlargement of the above results can be found here.