Join Chicago Debates for our new lecture series, coinciding with this year’s debate topic, Criminal Justice Reform-Resolved: The United States federal government should enact substantial criminal justice reform in the United States in one or more of the following: forensic science, policing, sentencing.

Tune in to hear from professionals in the legal field as they discuss a variety of topics to help you prepare for the upcoming debate season. You can watch Live on Thursdays on the Chicago Debates YouTube channel: bit.ly/cdlectureseries 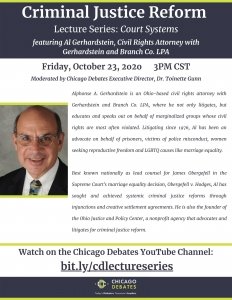